Hi Pumo, I hope you are fine ! Is Pumo Mines dead or are you still working on it ?
best regards
Top

Ok, so... I think it's time to get things clear about the current state of Pumo Mines - Kartsal Motivation project.
D2X-XL is mostly (and sadly

) a dead project now, and many don't even use it anymore, and Overload is the new kid in town, but still, Pumo Mines is and will always be my Descent dream project and want to see it done.
So, this year I'm resuming the work on the project, but some things must change in the way they will be made.

First of all:
I will focus on all unfinished levels, with just small changes to already made and complete levels.
This means there will be some inconsintency, mainly on the door frame designs (Levels 1 to 5 didn't had a 3d shell around the doors, but starting on level 6 they do. However, and at least for now, it's too much of a hassle to add those 3d shells to already made level structures).

Another thing that Pumo Mines won't have for now, are complex 3d pre-rendered movies.
I know the 3-level demo had a couple of movies, but again, if I want to focus on the campaign design, I won't be able to get the time to made those. However, there will be scripted exit sequences and effects on some levels (using accelerator triggers and stuff).

About 3D Models, I managed on previous years to finish the design of 3D models for the weapons (thanks to Metalbeast!), but many scenery props and level assets won't be made by me, will be used from royalty-free 3D assets that are (or were) available on the web (like SolCommand, Nobiax, etc)

And finally, but not least important, I will try to release a new playable version with some of the new levels as soon as possible, but you may encounter some issues with it, as I prefer to add updates and patches to it than keeping it unpublished for years (I will also made a poll, to see how do you prefer the new Pumo Mines versions to be published).

I hope you may understand, I've been struggling with some real life issues and health problems since some years, and making such a mod is very demanding for just one person, but I really want to see my project fullfilled, so these changes are a must (and I think they will be for the better).

Thanks for reading and for your support! See you in the PMC mines, take care and beware of the Hosako Empire!

PS. I'm also working on a simpler Descent project that you may see released soon, and it's related to the Pumo Mines universe

-Some screenshots of Pumo Mines as it's now:

It's realy fine to hear from you and tthat you are doing well ! Yes, Overload is there and I lke it. But what should I say, I didn't get the same feeling as when playing D2 !? In the meantime I'm retired and have plenty of time

karx11erx wrote:I didn't think you were still working on this. Really cool!

Merry Christmas and happy new year to all !
Top

karx11erx wrote:I didn't think you were still working on this. Really cool!

Of course! I stopped working on it on 2015 due to personal reasons, but now I'm back baby!

Glad to see there are still people interested on it, even some users on the Overload discord channel asked me about Pumo Mines.

Here's a small update of how it's going, as I applied new higher quality texturing (thanks a lot to Irontower for some of the textures that I used as a base!):
I finished most global textures, and also finished the per-level ones of levels 1 to 5.
Here you can see how it looks (screenshots of levels 4 and 5 are at the bottom of the picture)

The stuff of legend.

So here are more news about Pumo Mines.
Now it will be divided in three episodes. Each episode can be accessed from an initial hub level.
Each time you end an episode, you return to the hub but with locked entrances, so you'll need to exit to the main menu and start a new game to select another episode completely fresh as in a cold-start (no gathered weapons and powerups).
Thanks to Alter-Fox and LightWolf for helping me with the hub ideas and work.

The three episodes will be Mineral Valley (an 'origins' story), Kartsal Motivation (the one most are familiar with) and Muchikuche (16-year later story).
Everything is part of the same campaign/mod, but will use D2X-XL features to make the episodes work.

Work on first and second episodes is going pretty well, have been steadily progressing as of lately.

So here are some scenes of episode 1 (Mineral Valley): 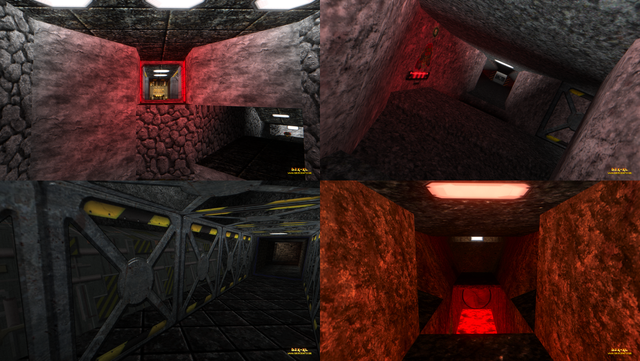 And the entrance to one of the levels of third episode: 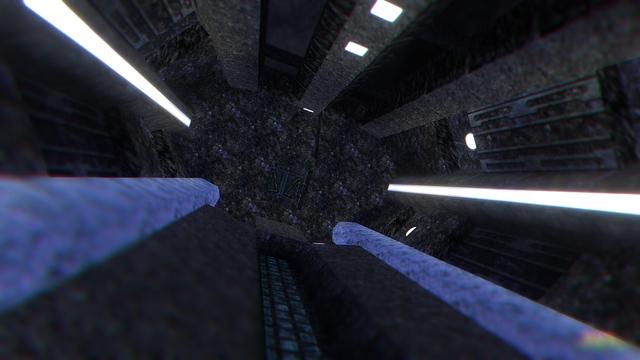 The soundtracks to the Mineral Valley and Muchikuche levels has also been published on my Bandcamp website, if you want to check them out: http://ramland.bandcamp.com/

Hope you will be liking the new updates!

Every screenshot looks great, and I think it's awesome that you're still motivated to get Pumo mines fully polished even if D2X-XL isn't really being developed anymore. It's been a project years in the making, I say see it to the end.

Exactly! glad to see you think the same.

Much like your Sphere project, in my case Pumo Mines is also a project I dreamed of since I was a teen, even before D2X-XL or any other source port even existed.
You would imagine how happy and grateful I'm now that D2X-XL exists, and after Diedel added some features I asked for that were specifically made for Pumo Mines.

Even if it takes its time, I WILL finish my project, take that for sure!